© tallgeese3 and Raven about Art, 2013-2017. Unauthorized use and/or duplication of this material without express and written permission from this blog’s author and/or owner is strictly prohibited. Excerpts and links may be used, provided that full and clear credit is given to tallgeese3 and Raven about Art with appropriate and specific direction to the original content.

I declare that summer is here!  With the days becoming long and sun-drenched, I thought that Karl Maughan’s exhibition titled Long View at the Gow Langsford Galleries, Lorne & Kitchener Streets, was excellently timed.  And boy, does it provide some competition for the view outdoors 🙂

Maughan’s work is a prime example of art that is best experienced in situ.  Photographs do not do justice to these dazzling, visually fascinating paintings that are popping with high key colour and splendidly textured surfaces.  At a distance his works appear photorealistic and precisely detailed, images of perfectly manicured gardens that are blooming in full force.  But then you get up close, and realise they are sublimely painted in oil.

His paintings are bustling with brushstrokes varying from mostly short to a few long, effortlessly dotted and dabbed all over with enviable skill.  There are lines for lavender, squiggly Ms for rhododendrons, loose swirls for camellias – what was previously seen with such clarity from a distance dissolves into abstraction.  Luscious shiny strokes of oil paint make you all the more aware of what comprises his works, and that such an image can be created by the touches of a loaded brush to a surface.

It is easy to be lulled into the notion that these are actual gardens that Maughan has directly lifted from life, but in fact they are constructed.  Though initially he began painting en plein air, he has since moved indoors and draws influence from colour photographs.  Maughan utilises aspects of several photographs and blends them to suit the composition he has in mind.  When you consider this, you begin to notice that all the flowers are efflorescing in plenitude, none appear to be waning, and the sunlight is gleamingly bright.  His works are more deliberate and considered than their suggested spontaneity.

His style and subject matter draws obvious comparisons with the likes of Claude Monet, Georges Seurat and Vincent van Gogh.  But when I think of Maughan, I am taken further back into the canon of art history (and back to art history classes at uni 😛 ) to Ambrosius Bosschaert the Elder (1573-1621). 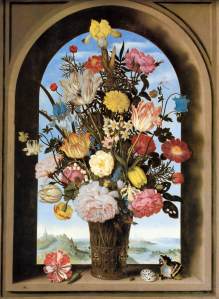 Bosschaert’s painting, Bouquet in an Arched Window (c. 1618, oil on panel, 64 x 46 cm, Mauritshuis, The Hague) is a still life with a number of blossoming flowers placed in a vase in an arched window.  The roses, pansies and tulips, to name a few, are minutely rendered in exemplary detail, yet this is an illusory image – the flowers in this painting would not have bloomed in the same seasons. Thus like Maughan’s work, the compelling realism of this painting is contrasted with their fantastical elements.  This plays on how we trust photorealistic images and what we expect, and I feel that Maughan’s works subtly indicate that something could be amiss with their garden paths that seem to weave into the distance and out of view.

Each of these works are quite large: they are all at least a metre in width and swathe the viewer.  Some of the works, such as Marchent Ridge (Oct 2013, oil on canvas, 240 x 360 cm) and Majoribanks St & Rata Rd diptych (May 2012, oil on canvas, 152.5 x 152.5 cm) are so enormous you could almost step into them (like the chalk pavement drawings in Mary Poppins) and take a meander between the bushes.

The work that is my particular favourite is Bell Road (2011/2013, oil on canvas, 183 x 305 cm).  I love the saffron yellow trellis along the top which is superbly vivid.  The rapid dashes that make up the flowers greatly contrasts the long smoothed paint application on the trellis and winding branches.  There are an abundance of flowers and plants, some of which are unusually coloured, such as purple and blue succulents.  The flowers are given almost equal competition by the dappled footpath, painted with speckled strokes of browns, beiges, whites and indigos.  Maughan’s gorgeous works are better than reality; they are how I would like to envision nature.

You can peruse the catalogue for Long View below, but I promise it’s much better to see them in person 🙂